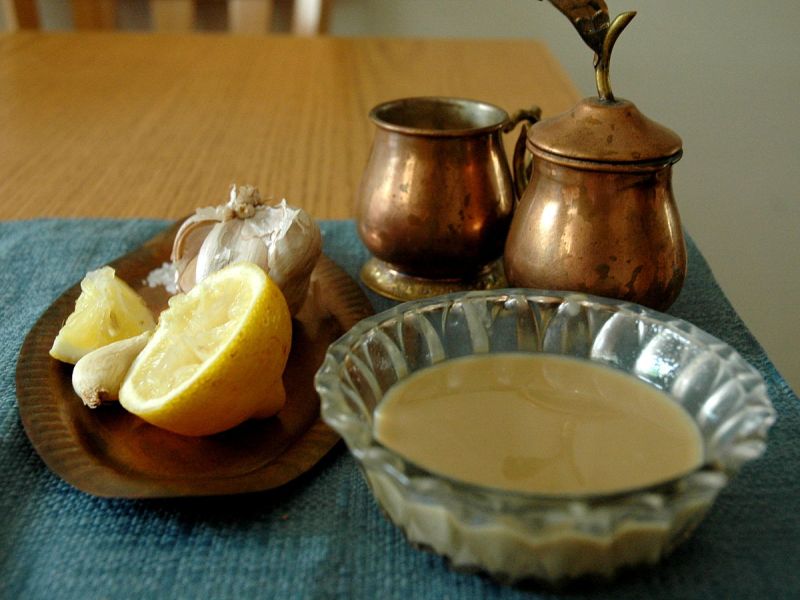 Tahini / təˈhiːni, tɑː -/ or tahina /- nə / is a Middle Eastern condiment made from toasted ground hulled sesame. It is served by itself (as a dip) or as a major ingredient in hummus, baba ghanoush, and halva . Tahini is used in the cuisines of the Levant and Eastern Mediterranean, the South Caucasus, as well as parts of North Africa..
From: en.m.wikipedia.org

Tahini is used in the cuisines of the Levant and Eastern Mediterranean, the South Caucasus, as well as parts of North Africa. Sesame paste (though not called tahini) is also used in some East Asian cuisines.

Tahini or tahina (Arabic: طحينة) is a Middle Eastern condiment made from toasted ground hulled sesame.[3] It is served by itself (as a dip) or as a major ingredient in hummus, baba ghanoush, and halva.

Tahini is of Arabic origin and comes from the colloquial Levantine Arabic pronunciation of ṭaḥīna (طحينة),[4][5] or more accurately ṭaḥīniyya (طحينية), whence also English tahina and Hebrew t'china טחינה. It is derived from the root ط ح ن Ṭ-Ḥ-N, which as a verb طحن ṭaḥana means "to grind",[6][7] and also produces the word طحين ṭaḥīn, "flour" in some dialects. The word tahini appeared in English by the late 1930s.[8][9] Tahini is a loanword from modern Greek tachíni (ταχίνι) which was originally adopted from the Ottoman Turkish "tahin" .[10][1] In Turkish and also in Italian, the original root tahin is still used instead of the globally accepted Greek adjustment to the word.

In North America, sesame tahini, along with other raw nut butters, was available by 1940 in health food stores.[8]

Tahini is mentioned as an ingredient of hummus kasa, a recipe transcribed in an anonymous 13th-century Arabic cookbook, Kitab Wasf al-Atima al-Mutada.[12]

The oldest mention of sesame is in a cuneiform document written 4000 years ago that describes the custom of serving the gods sesame wine. The historian Herodotus writes about the cultivation of sesame 3500 years ago in the region of the Tigris and Euphrates in Mesopotamia. It was mainly used as a source of oil.[11]

Tahini is made from sesame seeds that are soaked in water and then crushed to separate the bran from the kernels. The crushed seeds are soaked in salt water, causing the bran to sink. The floating kernels are skimmed off the surface, toasted, and ground to produce an oily paste.[14] It can also be prepared with untoasted seeds and called "raw tahini", which is sometimes sold as an organic food product.[15][self-published source?]

Tahini-based sauces are common in Middle Eastern restaurants as a side dish or as a garnish, usually including lemon juice, salt, and garlic, and thinned with water. Hummus is made of cooked, mashed chickpeas typically blended with tahini, lemon juice and salt. Tahini sauce is also a popular topping for meat and vegetables in Middle Eastern cuisine. A sweet spread, halawa taḥīniyya (حلاوة طحينية "sweet tahini"), is a type of halva sweet. It sometimes has mashed or sliced pistachio pieces sprinkled inside or on top. It is usually spread on bread and eaten as a quick snack.

In Armenia, tahini can be used as a sauce to put on lahmajoun.

In Greece, tahini (Greek: ταχίνι) is used as a spread on bread either alone or topped with honey or jam. Jars of tahini ready-mixed with honey or cocoa are available in the breakfast food aisles of Greek supermarkets.

In Cyprus, tahini, locally pronounced as tashi, is used as a dip for bread and sometimes in pitta souvlaki rather than tzatziki, which is customary in Greece; it is also used to make "tahinopitta" (tahini pie).

Tahini is called ardeh (ارده) in Persian. In Iran it is used to make halvardeh (حلواارده), a kind of halva made of tahini, sugar, egg whites, and other ingredients. It is also eaten during breakfast, usually with an accompanying sweet substance, such as grape syrup, date syrup, honey, or jam. Ardeh and halvardeh are among the souvenirs of the Iranian cities of Yazd and Ardakan.

In Turkey, tahini (Turkish: tahin) is mixed with pekmez to make tahin-pekmez, which is often served as a breakfast item or after meals as a sweet dip for breads.

In Iraq, tahini is known as rashi, and is mixed with date syrup (rub) to make a sweet dessert usually eaten with bread.

In Israel, tahini (Hebrew: טחינה t'hina) is a staple foodstuff. It is served as a dip with flat bread or pita, a topping for many foods such as falafel, sabich, Jerusalem mixed grill and shawarma, and as an ingredient in various spreads. It is also used as a sauce for meat and fish, and in sweet desserts like halva,[16] halva ice cream and tahini cookies. It is also served baked in the oven with kufta made of lamb or beef with spices and herbs, or with a whole fish in the coastal areas and the Sea of Galilee.

In the Levant, tahini (Levantine Arabic: t'hine) is a staple foodstuff prepared with salt, lemon juice, and optionally mashed garlic. It is served as a dip with pita, or a topping for falafel and shawarma, and as an ingredient in various spreads. It is also used as a sauce for meat and fish. It is a main ingredient in a seafood dish called siyadiyeh.

In the Gaza Strip, a rust-colored variety known as "red tahina" is served in addition to ordinary tahina. It is achieved by a different and lengthier process of roasting the sesame seeds, and has a more intense taste. Red tahina is used in sumagiyya (lamb with chard and sumac) and salads native to the falaheen from the surrounding villages, as well as southern Gaza. In the West Bank city of Nablus, tahina is mixed with qizha paste to make "black tahina", used in baking.[17]

Tahini is used in sweet desserts like cakes, cookies, halva and ice cream and halva with pistachios.[citation needed]